the road to Luxor

My driver smokes in the car, plays Quranic chants, and slags off the Muslim Brotherhood. His brief history of modern Egypt, in basic English: Gamal Abdel Nasser not good, Anwar Sadat not good, Hosni Mubarak good. With Mubarak not Muslims one side, Christians other side: we all Egyptians. Morsi bad, Qatar bad, Al Jazeera bad: they blah blah blah blah blah blah Egypt not safe, tourist not come. We like tourist, we safe, we friendly, we kind, Egypt beautiful. England good, America good, Barack Obama good! Emarat good, Saudi good, Kuwait good. Morsi not good, say: Christians go out of Egypt. They burn 40 churches! But Muslim, Christian, all Egyptian – my friend Christian, last week his wedding, I go in his church, good!

I agree with him that Egypt is beautiful, that religious tolerance is good, and burning churches not good. More than that, I don’t feel qualified to say.

He drives like Sebastian Vettel too; they all do. 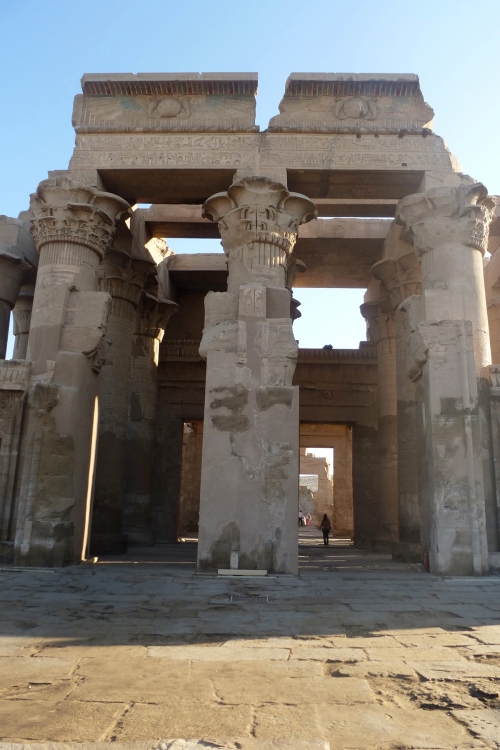 He takes me to Kom Ombo, a Ptolemaic temple by the Nile, where there is an Italian tour group fresh off their boat. Then to Edfu, a glorious Ptolemaic extravagance, at which a few French people. 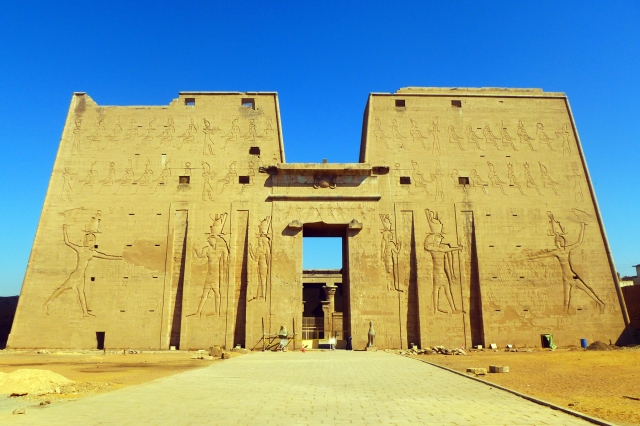 The pylon of Edfu temple

I take photographs, give baksheesh, and fight off those who want to sell me trinkets. In Luxor, I swap drivers. My plan – as I’ve made clear – is to see the Ramesseum and Seti temple, and then to be dropped at Luxor temple. A couple of miles into the drive, we stop to pick up an agent. Why do we need an agent?  Amber lights flash. The agent assures me of his hospitality; my defensive armor locks into place. Hospitality, translate: I want to waste your scarce time pretending to look after you by subjecting you to experiences you don’t want with the goal of extracting from you as much money as possible for goods you will carry uncomfortably home and later regard as clutter. I get them to drop me at the Ramesseum – which happily coincides with Friday prayers, so they leave me alone for the duration – and then at Seti.

The Ramesseum, Luxor. The fallen statue is Ozymandias, King of Kings, as in the Shelley poem.

Afterwards, the offers start flowing: “I show you alabaster!” No thanks; I did that last time (I lie; I was never interested in the first place). Please take me to Luxor. “You want see Valley of the Kings?” No, I did that last time. “How long you stay in Luxor?” I am leaving tomorrow morning, by plane. “Where is your hotel?” I can’t remember (subtext: I know perfectly well but I’m not telling because otherwise I will find you sitting unwanted in the lobby later pestering me to buy alabaster I don’t want). “You want taxi to airport?” No thank you, I arranged that already (precisely to protect me from people like you). Smiles turn to loud grumbling in Arabic on the mobile: I can just imagine the conversation. “You told me this guy tipped generously and he was a dead cert – but I can’t take him for anything at all! He won’t even say where his hotel is!” At Luxor Temple, one more inquiry about whether they should wait: no, I don’t know whether I will go now or later when it’s cooler. And one final desperate pitch for my hotel’s name – “we take you there!” Oh man – I think but don’t say – I have legs and a map; now go away and leave me alone! But my tone is sufficiently brusque that they back off; I tip the driver but not the agent.

But I know why they do it: they’re hurting. When I get to my hotel, the co-owner, a Belgian woman married to a local, says to me: it has never been this bad. There was the Hathshupseth massacre, and there was 9.11, but after these the tourists came back within six months. Now it has been two-and-a-half years. I have seen real hunger in Luxor, she says, among those who used to make their living from the tourist trade…

And for me, sitting in a café in the garden of the Luxor hotel, all this – temples and touts – is just a memory. But I have been there – to Abu Simbel and to the head of Ozymandias, and looked on his works without despair. And I will remember this to my dying day, most likely without hunger.

This entry was posted in misery for the many, freedom for the few, road and tagged Egypt. Bookmark the permalink.