a crash course for the ravers

“So who was this dude”, ask my kids, “and why are all the middle-ageds so upset?” Why did the principal of my daughter’s school (born somewhere dahn sarf, 1962) approach me in the playground at pick-up time, to commiserate and reminisce? And what about that other one that died a couple of weeks ago, the black leather type with the big moustache? Why didn’t the principal talk to dad about him?

Yes, kids (and with all respect to the headbanger tribe), this death, though no more or less unexpected, is culturally a much bigger deal than Lemmy’s. And yes, it has really got to the grownups –at least those of a certain age, the unacknowledged demi-generation stuck in the middle: too late to be “Baby Boomers” (with all their hippie gear) but to whom “Generation X” icons like Kurt Cobain were a tardy footnote to what was really going on. Let’s call us (thanks to Richard Hell) the Blank Generation. On Facebook, my old schoolmate Huw says he “had a bloody great lump in my throat on more than one occasion today…a big part of my youth, and a constant companion throughout my life, is gone forever”; the ever-creative Julian (who I didn’t even know in Bowie’s heyday) called him the “single most important musician and influence on my life. The most important person in my life that I don’t know”. Andy said, simply: “time takes a cigarette.” My wife, who grew up an ocean away, and whom I didn’t meet until more than 20 years after Scary Monsters (the last great Bowie album, at least until this year), has been raving about Space Oddity and Let’s Dance. My own moment came yesterday morning with Cracked Actor: a dirty, snarling song about a dirty-minded Hollywood has-been bloating his greedy, savaged ego with a chew-her-up-and-spit-her-out hooker, lurching under an orgiastic and genuinely frightening riff – and suddenly the fragility breaks through, Bowie pleading “oh stay, please stay”, and the tears rolling down my face….

This is the first time I’ve been inspired to blog for over two years; let’s just say it has reminded me not just that time is limited, but that I’m still getting educated, and I’ve got to write it down…

So how to explain this outpouring? Huw thinks “it must be the timing of his death – its recency highlighting the beautiful poignancy of his final work”. There is something to that: the way he so jaw-droppingly turned his own departure into an audiovisual tour de force was all of a piece with his heyday, and with the impulses that made him such a creative giant in the first place. But it’s also circular logic: only Bowie could have done something so, well, Bowie, shuffling backwards into the cupboard to become his own skeleton there for all of us to keep; and he couldn’t have done that if he hadn’t been what Bowie was in the 70s, and we didn’t all know, and love so much, what that was.

Myself, I think there are three things I have to tell my kids about why we are crying now. First, there’s the astonishing music. They listen to Imagine Dragons, Jake Miller, Sara Bareilles, all fair so far and decent enough; but – call me an old fart – what depths of iconoclastic individuation are they missing out on, at the age of eleven, by not being basted in something with the imaginative license of The Jean Genie, Panic In Detroit, Lady Grinning Soul? How, as adults, will they be kookie too (and consciously strive to stay that way) without, at thirteen, having their zeitgeist saturated with a music of this sophistication, sass and wit, and being able to take that totally for granted:

So for them I made a playlist. It had to be fairly short; no sense in being comprehensive to the point where, in the car or over the dinner table, accusations of generational imperialism begin to fly. It was a personal compilation of what inspired me; I managed to keep it under three hours by omitting some of the songs that almost everyone else will say should be in there: Life on Mars, Diamond Dogs, Young Americans (that “president Nixon” reference would have been just too much like a 1970s blimp going on fogeyishly about Churchill and Hitler), Station to Station, Fashion. My wife has already objected to my selection of the stripped-down 1979 re-recording of Space Oddity over the string-soaked original. Almost nothing before Hunky Dory, and nothing after Scary Monsters. That I can make and justify these idiosyncratic choices, while admitting that nothing is definitive and there could – should – be others for others, only goes to show the almost endlessly creative strength-in-depth of Bowie’s oeuvre, and illustrates that he was many different things to different people while still being important to everyone (of which more in a minute). So here (probably better shuffled than played in a straight line) is my playlist:

Second, there’s shared memory. Those of us who were that age in the 1970s have reference points with friends, regions, tribes: for me, Telegram Sam, the 1972 FA Cup Final, Pretty Vacant, Led Zep at Knebworth. For others, maybe, Deep Purple, Dennis Law sinking Man United, Genesis, Dr. Feelgood, Brian Clough, Lemmy – even Brain Salad Surgery! But Bowie did enough, from Space Oddity to Life on Mars to Ziggy to the Thin White Duke, Berlin and the New Romantics that, in some way and at some time, he touched everyone. There is a sense in which Bowie was the 1970s.  Different facets of the diamond glittered for different people at different times; but all of us, in some way or another, were dazzled and believed all the way, at one time or another. And with the passing of time (which no longer, in these measured days, falls wanking to the floor), we have that in common. At least for those moments heaven loved us, the clouds parted; Bowie was on the radio, on the stereo. His death triggers grief at those formative days that live on but will never come again, as we shuffle backwards, more or less knowingly, towards the cupboard in which we will all one day be skeletons.

But while we remain here (and this is the third thing) there’s more than that. What it is was signaled by something you could almost call a “Bowie moment” yesterday morning, while I was taking my little girl to school. Ten years old, a few weeks ago she bought herself her first grown-up coat – her own choice, and gorgeously stylish it is too. It almost looks like something Bowie might have worn himself in his Young Americans phase. The weather was warm, so she had no call to wear it until the temperature dropped this week. But when she rolled up at the school gate, her courage faltered: “what if”, she worried, “the teachers don’t like it? they won’t let me?”

“If you need to keep warm”, I said, “why should you have to wear something dull just because other people are? Go on, tell them you’re the Thin White Duchess – they’ll know what you mean.” So she strode into school with her head held high, and the teacher at the gate said “Whoah! Look at you!” 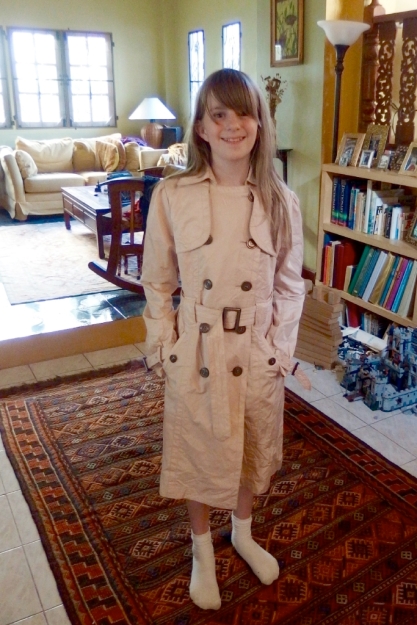 One small example, but what I was trying to tell her was: don’t be scared; be yourself and stick at that, the best you can. I learned that from Bowie, though it seemed to come more naturally to him than it did to anyone. He was the master. All the glorious road from Hunky Dory to Scary Monsters, through all those ch-ch-ch-ch-changes, he remained relentlessly, uncompromisingly, uniquely himself; and not just one self, but all the twists and turns of his own evolution, with us in his wake. Yes, the quiet heroes of the 1940s had courageously bequeathed a western world more or less free of tyranny and the kind of lethal racism that Donald Trump is now trying to bring back into fashion. Their noisy inheritors of a quarter century later – Lennon/McCartney, Dylan, the Glimmer Twins, Hendrix (among others) – took the next step: be unafraid to be who you are, whatever society tells you. But Bowie, using their shoulders as a launch pad, made his own leap: who you are is constantly evolving, and to that protean self be true. The 1960s broke down the door: now be what you’re going to be, and don’t get stuck with any fixed definition of what that is. The ripples change their size, but never leave the stream.

With hindsight, Scary Monsters was the far end of that high water mark; by that time you could almost hear the tide draining out. But the ground those pioneers won is still the ground on which to play, and what I want my kids to inherit. Isn’t that what the starman told him: let the children lose it, let the children use it, let all the children boogie?

Draw the blinds on yesterday, and it’s all so much scarier. Gimme your hands.

2 Responses to a crash course for the ravers