Jeoffrey Boycat, our boy cat (his name a combination of a Yorkshire joke and the Christopher Smart poem) spends a fair amount of time out at night catting about. One of my morning duties, along with putting on the kettle for myself and the toast for the kids, is letting him in at the kitchen window. On Sunday morning Kyria noticed that he had a large circular wound in the fur right in front of his tail, as large as a Victorian penny and blood red with the exposed flesh. Allison took him to the vet, who stapled the wound closed and put a translucent conical plastic collar on his neck, to prevent him getting at the staples while the wound heals. So, Jeoffrey before: 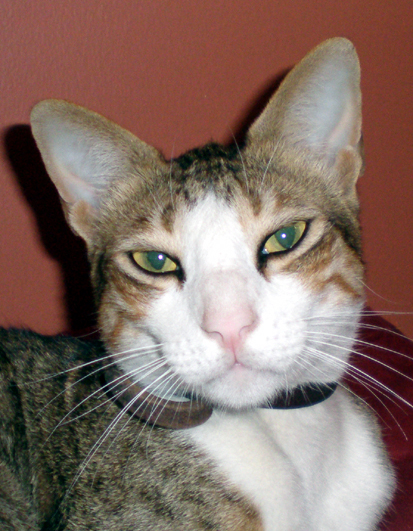 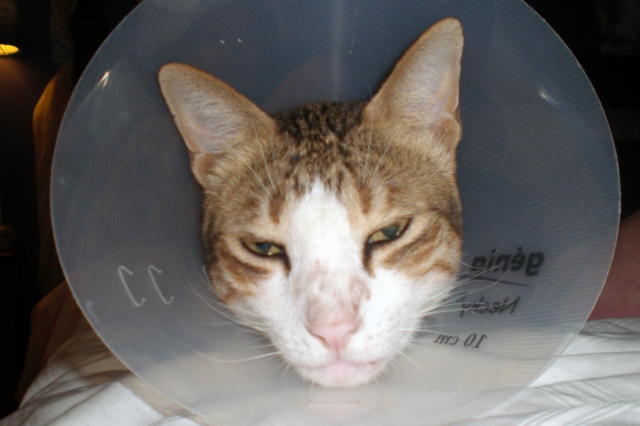 He really doesn’t like it at all. A lot of the time he spends doing a most un-boycat like jig: a couple of dance steps backwards, then a push forward off the back foot designed to smack the unwanted collar against the corner of a hard object like a chest or a door, in the hope that this will prize it off his neck. The rest he sits and mews repeatedly, plaintively, at his trusted human companions, lamenting his new state, or lies forlornly accommodating the intrusion to the cushions around him. Of course he’s not let out of doors where he could do boycat damage to the protective headgear, or his wound, or his reputation with the local cat community, and this doesn’t help his mood either.

This has raised the question in our family: do catbrains understand the notion of temporary? For him, surely, there must be the memory trace of a time when there was no headgear, and the sense of sad contrast that accompanies that; and of course there is his present experience of obstruction and frustration; but could he conceptualize or entertain the question of whether this is a new, permanent state, or a merely temporary inconvenience – even when, pityingly, we tell him? Do his mental categories include hope, or fantasies of freedom, or even the possibility of future change? Or is he stuck purely in the present moment that theologians consider so liberating, but in which Jeoffrey is currently suffocating?

This entry was posted in daddymummybabyblog. Bookmark the permalink.