My arrival in Budapest wasn’t too salubrious: a drunken woman and a man with a weatherbeaten face and a moustache like out of a chronicle of some Balkan war shouting and throwing a table at each other, and an old man ferreting through a bin for anything he could find. But then again it was the train station.

Budapest is another city of grand buildings on leafy boulevards, but one difference with Vienna is that quite a lot of them are crumbling, even in the centre (though others have been beautifully restored). The atmosphere is a whole lot rougher than Vienna, though, and at the same time more laid back – more like Paris in that way. There are a lot of British flags around (almost as many as the statues of patriots!) – I am guessing these are for English language schools. I am finding that I can make myself understood in English rather than German here too (which is just as well, with the state of my German…)

The place I am staying is right behind the opera, which is a grand building in a large avenue, in an area full of pavement cafes. It was meant to be Budapest’s answer to the Champs-Élysées.

The weather has warmed up again now – about 25 degrees – so I am sitting outside in a quiet street having a glass of wine (and the Hungarian wine I have had so far is very tasty), surrounded by lots of people chatting and laughing after their day at work (that’s the kind of thing people often do in Europe…) With the summer sun and the warm evening and the convivial atmosphere, something about it makes me imagine that I am in old Pannonia, the Roman province on the banks of the Danube, where Hungary now is, sitting outside a tavern…

Today I went to see the Parliament building (very grand, as you might expect) – this is it seen from across the river: 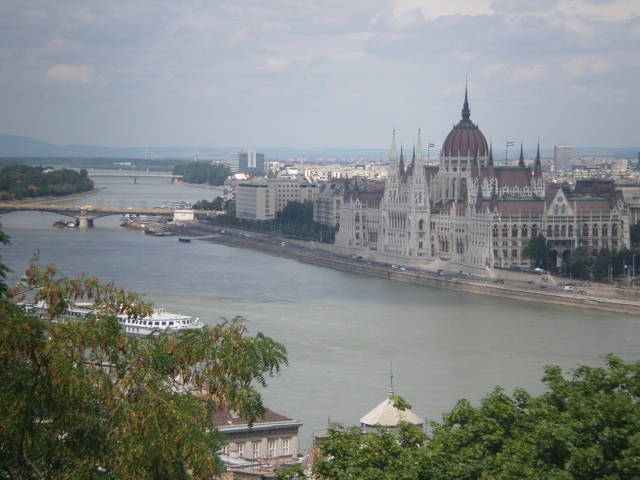 and this is part of the inside: 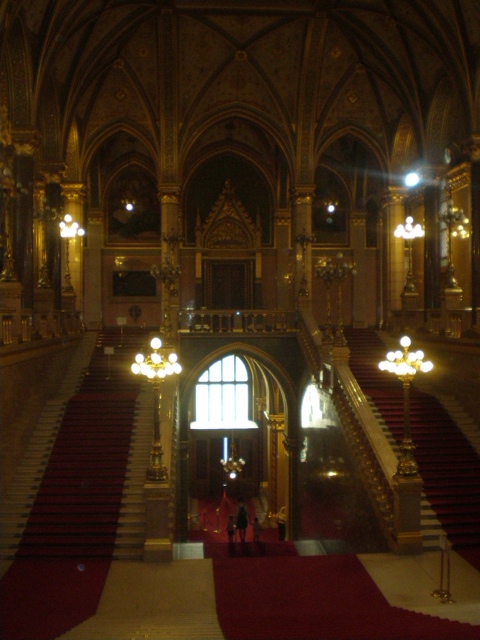 I also went to see the old Royal Palace on top of the hill – very grand too:

It was set in a nice quiet area of old houses: 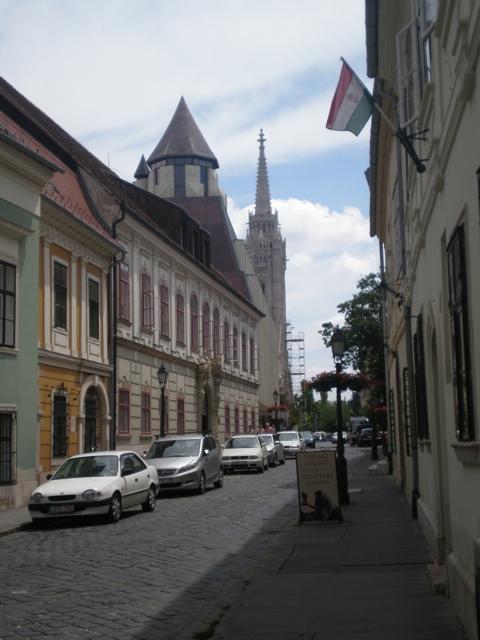 They have done some decorative work on some of the roofs too:

I went to a couple more spectacular churches too – this is the basilica of St. Stephen (who was the first king of Hungary, 1000 years ago), seen from across the river:

and from right in front: 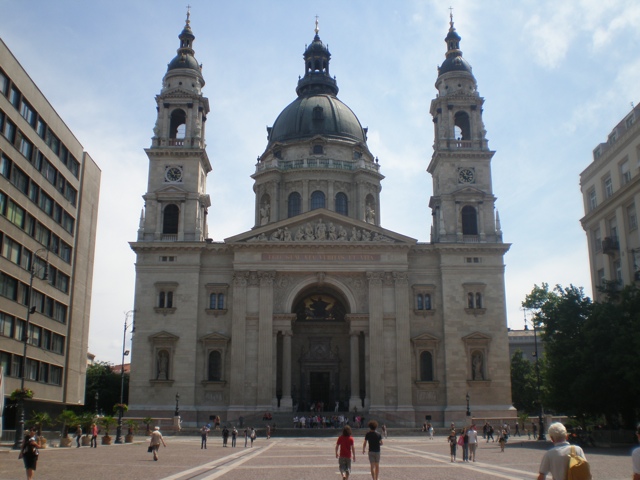 and from the inside, with a band playing (they were playing Jerusalem):

And this is the inside of a church named for Matthew, who was another king of Hungary (I guess they figure a lot of their kings were saints):

Lots more gold, but they did it in a distinctively Hungarian way, like making odd-shaped windows and painting the pillars:

Maybe this is because this church was once a mosque – the Turkish Ottoman Empire, which was Muslim, ruled Budapest for 145 years, about 400 years ago…

The last place I went today was a different religion again. Budapest has the largest synagogue in Europe (or so it claims) – a synagogue is like a church or a mosque, except that it belongs to the Jewish religion. As you can see, it looks quite similar to a Christian church, except that instead of crosses or pictures of Christ, it has geometrical patterns:

In some ways, though, this was quite a sad place, because after they had built this synagogue more than 100 years ago, about 80 years ago Adolf Hitler came to power in Germany, and he wanted to kill all the Jews in Europe, because he thought (he was crazy – and, by the way, one-eighth Jewish himself) that they were responsible for all of Europe’s problems. This was actually quite an old story – Jews had been blamed for other people’s problems, and thrown out of their houses and even killed, from time to time for many centuries in Europe. But Hitler had the power and the technology to kill the Jewish people on an industrial scale – and that’s what he did. There were over 8 million Jewish people in continental Europe in the 1930s – about 6 million of those were killed before 1945. (In this event, called the Holocaust, between another 5 and 10 million people were also killed, by the way, because Hitler and his cronies didn’t like them, for one reason or another – they were Polish, or they were gay, or they had the wrong ideas, or…)

The Hungarian government didn’t like what was going on, and it wouldn’t send the Jews to the places in Poland and Germany where they were being killed in death factories. So the Germans invaded Hungary and got rid of the ruler, and put another ruler, a crazy who agreed with them, in his place. The Jews were made to wear special badges to show that they were Jews, and they were forced to live in a certain area of town called the ghetto; they weren’t allowed to leave, and no-one else was allowed to go in. Then they were shipped out in trains to the death factories, packed into the train cars so tightly that they could hardly breathe. When they got to the death camps, the old people and the sick people and the pregnant women and all the children – the children! – were taken out – about 12,000 people each train – and put in special rooms which were filled with poison gas so they all died right away. The men and the women who wren’t pregnant were made to work almost without food, until they died of exhaustion and starvation.

Can you imagine people doing that to other people?

But the new, nasty Hungarian government didn’t have enough time to send all the Jews to the death factories – so they tried to starve them to death in the Jewish ghettoes before the Soviets arrived. I mentioned before that the Soviets came in and took over the eastern half of Europe from 1945 to 1989, and that this wasn’t very popular with the people who lived there. But one good thing that they did do in 1945, when they arrived, was kick out the Nazis and try to help out the Jewish people who were still alive. This is a photograph of when they arrived in Budapest and found the bodies of many Jewish people who had starved to death in the snow. 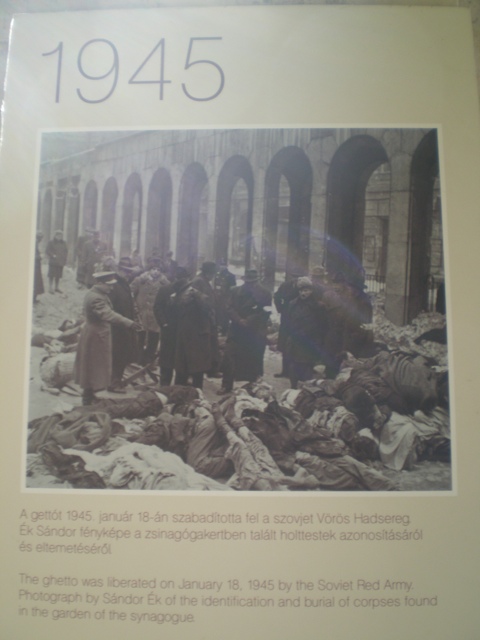 If one good thing came out of these dreadful events, it was a sense in much of Europe, at least, that this kind of thing must never happen again – that we must all be tolerant of our different religions and cultures. But of course there are far fewer Jews in Europe than there used to be…