hard times in Greece, and how to survive them

The Guardian had a story about a guy in Patras who has been so hard hit by Greece’s current troubles that he could no longer support his ten children and had turned four of them in for care. Sad, yes, but what on earth is anybody in Europe in the 21st century doing having ten children? Didn’t he feel he could afford a few packets of condoms? Surely in the boom times he could have secured a bank loan to splash out on a regular supply? Something of a false economy not to have done, I would say. And now he wants the state to subsidise his excessive progeny, as if they were Goldman Sachs or something? Fortunately, private philanthropy rode to the rescue, and he was bailed out by a rich type in Athens who is funding him for a new house. Just as well for him that he went to such lengths it got in the media…

That may be an extreme example, but I read somewhere that Greece’s money supply has declined by 16% in the last two years. That’s pretty incredible – of every 6 euros in their pockets, one just disappeared. No wonder there’s a grim, purgatorial aspect to the place. Start with appearance: most people are dressed either manifestly cheaply, like they just can’t afford anything that costs more then a few euros, or just plain badly. Among the young women there is a fashion for knee-length boots and skin-tight factory-faded jeans, which don’t necessarily do all of them any favors. Then most people over 30 give the impression from their lined faces and troubled demeanours that they have borne a lifetime of hardship and toil. Even the little kids look like they are in training for a lifetime of hardship and toil. Is this because of the depression, or has it always been like this?

The depression is manifesting itself in the public sphere too. On the way from Athens to Thessaly, the railway was paralleled for many miles by a ghost road: all the tunnels and road beds complete, but none of the surfacing, and no work going on. In Thessaloniki, I had a great view of the Roman agora from my hotel room: 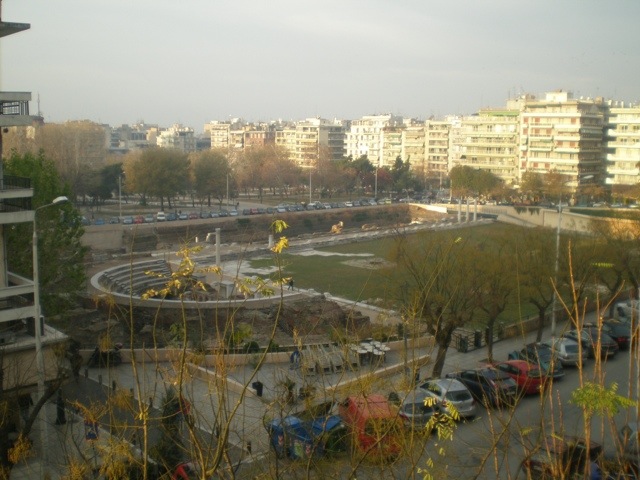 But when I went down there to take a closer look, it was all locked up. Same story with the local palace of the fourth century Roman Tetrarch Galerius, except that there were two young people sitting in the ticket office, with the windows closed against the cold; when I knocked, the woman opened up to explain that the place was closed. For good? For a long time; there are works in progress. Ah. Same with the two antique Turkish baths in the city, which, according to the guidebook, had been converted into an art gallery and a concert space: both of them shuttered and padlocked. All of these places were cited by the guidebook as free; so why didn’t they whack on an entrance fee? Three euros, say, like the admission to the White Tower, which also used to be free? Maybe it’s the time of year; but then why pay two people to sit in the entrance to Galerius’ palace turning customers away?

Religious spaces? A little different. Galerius’ intended mausoleum – known as the Rotunda, and converted by Constantine the Great into Thessaloniki’s first state-sanctioned church, frescoed up, then converted by the Ottomans into a mosque with a minaret, and then back again, but now a ward of the state – was open without charge. On the other hand, it was entirely jacked up on the inside with scaffolding, and most of the windows – up high – were shattered. 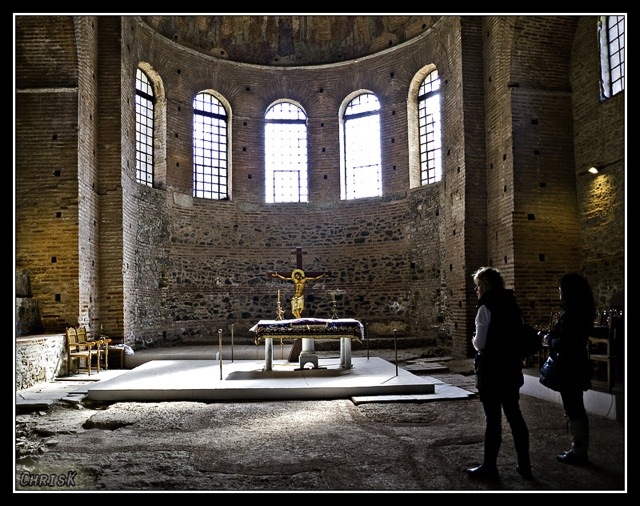 Is it doing better – marginally – because the church is helping out? Certainly the straight-up churches I visited, whether giant or pocket-sized, were freely admitting visitors. 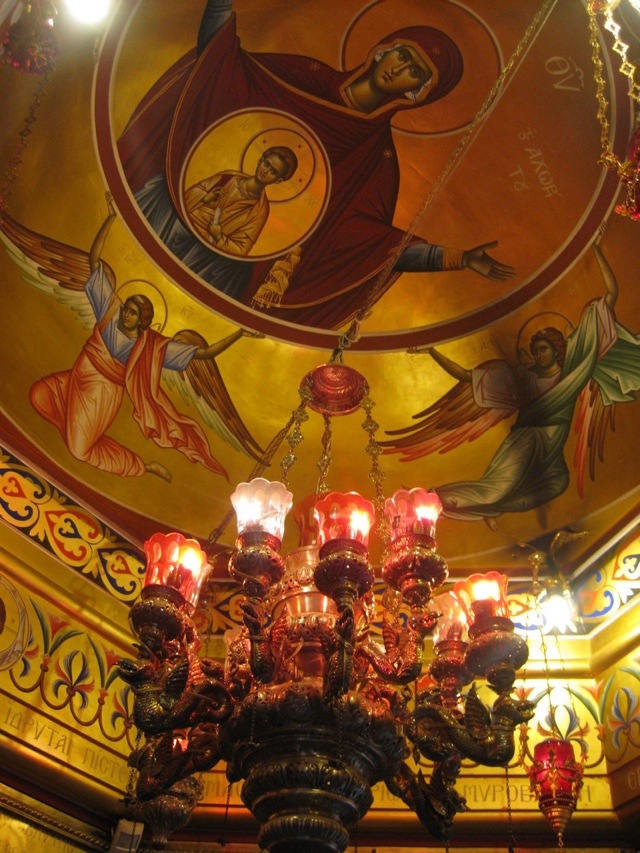 At Agios Dimitrios (above), built on the spot where the city’s patron saint, a Roman legionary, was caught preaching by Galerius’ thought police (he was subsequently speared to death), nobody turned me away; they didn’t want any money either, but I dropped them a couple of euros anyway. 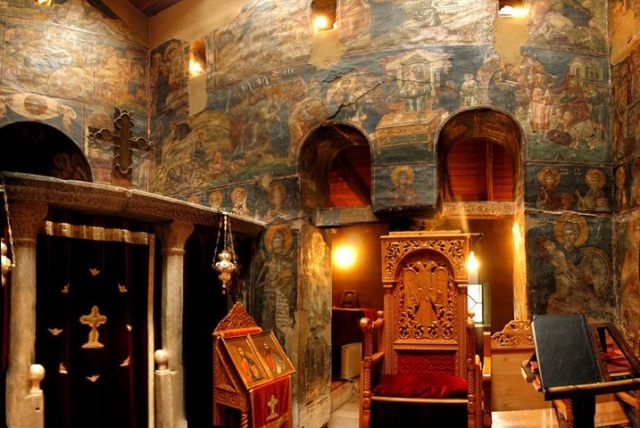 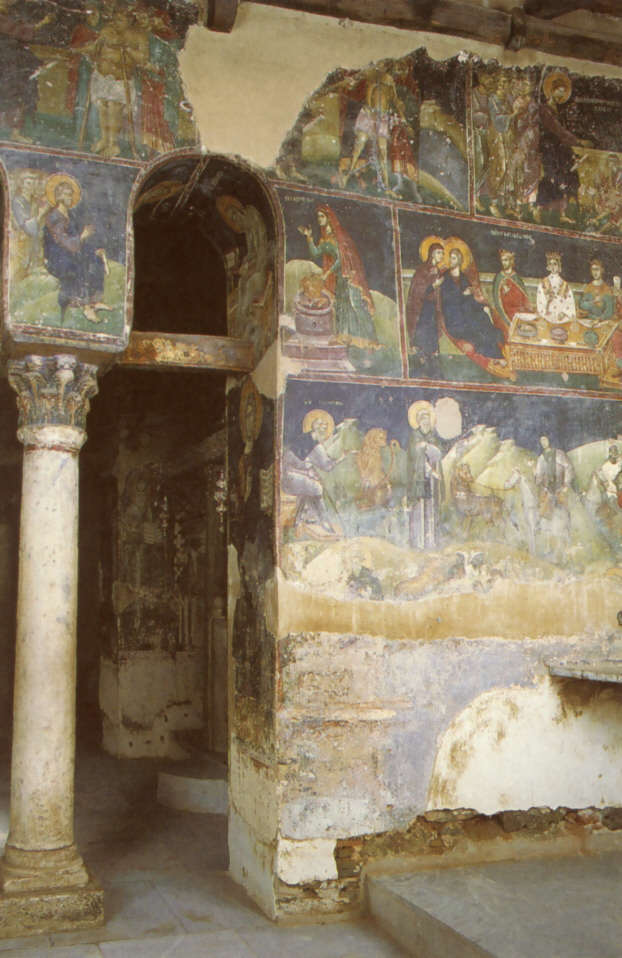 At Nikolaos Orfanos, set in a cypress-lined garden suffused with peace – It was all too easy to imagine philosophers of the fourth century discussing their trade in the sunshine here – a caretaker spotted me on the grounds, unlocked the place, and stood by while I marveled at the delicate elegance and perfect composition of the age-darkened medieval frescoes (above). Again, it was free, but I gave her a couple of euros anyway. 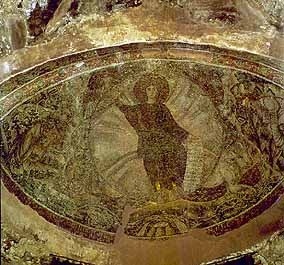 At Osios David, an even tinier church on the hill, reputed to have been built for the baptism of Galerius’ secretly Christian daughter while he was away on business, a hunched old lady with an index finger unnaturally bent beyond the final knuckle pointed to the 4th century mosaic of Christ and the evangelists (above), offering monosyllabic commentary in a mix of European languages, before charging me “oon evro”. I only had a ten, but she rummaged around in her purse with her bent finger and found eight before I let her keep the extra one.

It was at the monastery of Vlaton up by Theodosius II’s fifth century city walls that I worked it out about the Orthodox faith and its art. First, it existed from very early days – the fourth century – at a level of sophistication that didn’t arrive in western Christianity until well into the middle ages, unless you count the illuminated manuscripts of the British Isles, and those were really largely pagan in character. Second, they kept it simple – a collection of clearly labelled saints and biblical scenes in familiar if not stylized poses, along with a few aspects of Christ (the pantocrator or kosmokrator being the most stunning combination of simplicity and power). Third, they overwhelmed you with otherworldly colour, especially gold. Fourth, they soft-pedaled the crucifixion; yes, there are one or two in any given church, but often hidden away from view in the sanctuary, and even those downplay the blood and gore and suffering; certainly no stations of the cross plastered all around the walls (a connection here: were there pogroms and expulsions of the Jews in south-eastern Europe, compared to the west? I don’t think so, though Russia is a different case, and this thought may break down there…)

Anyway, given this, it is no wonder that this religion holds such sway that it just carries on while the state – Caesar – goes into secular 21st century deep freeze…