through the Iron Curtain

There is no doubt that Vienna is quite a mind-blowing town when it comes to art, even if (judging from the work in the Secession House) it looks like it might be living off its former glories (but perhaps that’s not a fair representation – I didn’t really take the time to find out – or perhaps the creativity has moved into other areas, like music). As a city, it’s a little too grand, slow and rectilinear for my taste – I prefer the haphazard, bubbling cosmopolitanism of say, Paris. But it does have great warmth and charm.

It’s easy to forget how close that may have been to getting destroyed; that for ten years after 1945 it was, like Berlin, a city administered by the Soviets as well as the Americans, British and French. It probably only escaped Berlin’s fate – a Vienna Wall – because the powers took turns administering the centre of the city, rather than dividing it geographically, as they did in Berlin. Then, in 1955, in return for a declaration of neutrality, Austria was given its independence, nevertheless to remain trapped in a scary corner of Europe’s frozen Cold War landscape – Czechoslovakia to the north, Hungary to the east, Yugoslavia to the south – for another 34 years.

There is one reminder, though:

This is the memorial to their own victory that the Soviets built in 1945, within four months of liberating Vienna from the Nazis (the figure on the top of the column is a Soviet soldier, waving a Soviet flag). It’s not in the guidebooks, or marked on the maps, though it’s hardly tucked away in a corner; they stuck it right below the Belvedere, and close to Karlsplatz, one of Vienna’s main squares. Perhaps everybody ignores it because it’s an insult: although the first wave of Soviet troops that liberated Vienna in April 1945 were well-disciplined, those that followed acted like barbarian hordes (the monument is sometimes apparently known as the memorial to the unknown rapist); perhaps because its savage celebration of power is so at odds with Vienna’s gentility; perhaps because it provokes a shuddering recollection of how close Austria came to the fate of the surrounding countries.

There was no such lucky escape an hour down the grey and rainy Danube, in Bratislava. The hydrofoil that takes me there is called Twin City Liner, but if that is an accurate description then Bratislava is definitely the poor relation. The Soviets planted their iron boot in an inescapable way here, siting their memorial where nobody could forget who was in charge:

They also surrounded the old town with a ring of factories and mass housing, and built a giant bridge over the Danube: 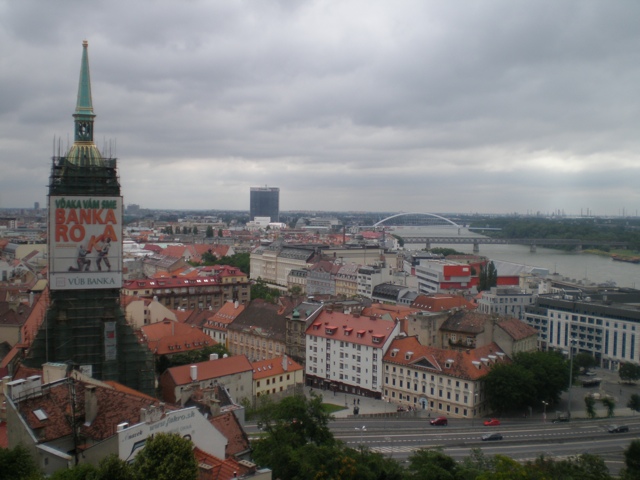 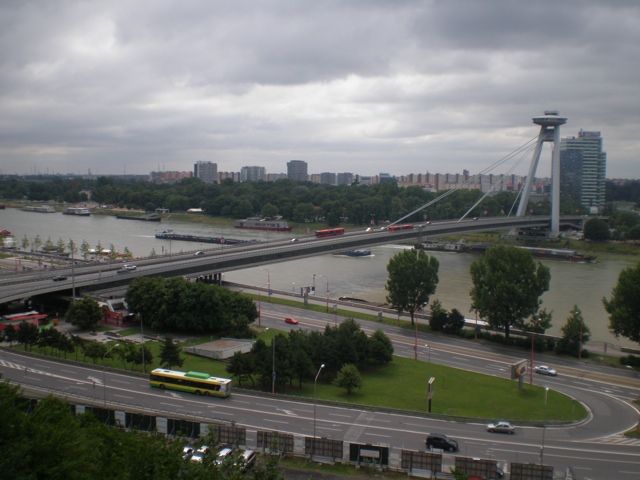 When I arrived, Sunday evening, there was a Polish folk band struggling against the elements for the benefit of a few interested people:

You can see from that that the old part of town has some beautiful buildings with some nice details – and some of those central European onion steeples. Here are some more pictures: 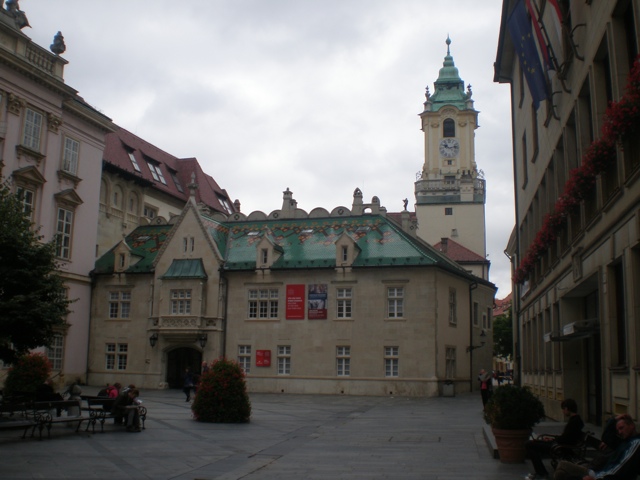 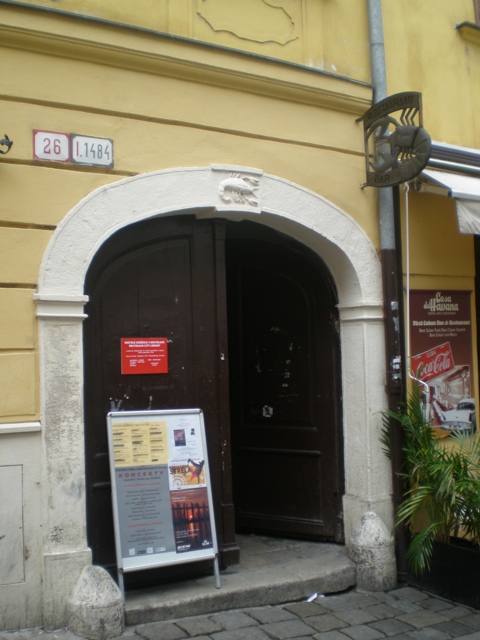 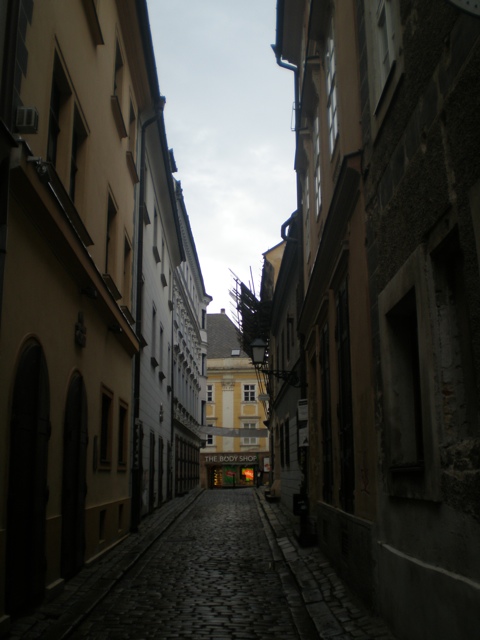 You can see from the shop at the end of the alley in the last photo that western brands have definitely arrived here. In fact, although the place does have a certain post-communist tattiness to it – the ugly Soviet-era buildings are crumbling faster than the older ones – there also seems to be a fair bit of money around, at least in some people’s pockets. But something still doesn’t seem quite right – and not just the way the straight-line steel and glass sits cheek by jowl with the old classical and baroque styles:

No, there is a certain ill-at-ease feeling about the whole place, a world away from Vienna’s grand self-confidence. Then I found out something that maybe explains it: here, in what is now the capital of the Slovak republic, with a population over 90% Slovak, a census taken 100 years ago, just before World War I, showed that only 15% of the people were Slovak! The rest were Germans and Hungarians, with over 40% each. The town was not even normally called Bratislava – its usual names were Pressburg (German) and Pozsony (Hungarian). But in the 1918 division of Europe at the end of World War I it was given to Czechoslovakia; the Hungarians didn’t like it, rebelled, and were kicked out, their property given to Slovaks. The same thing happened to the Germans after the end of World War II in 1945. So the Slovaks who are here now are living in a city built by someone else! No wonder the place doesn’t feel quite comfortable in its own skin…

1 Response to through the Iron Curtain