It only takes so long looking at the pretty face of central Europe before you are bound to end up staring at the screaming, searing wound gouged across it: the treatment of the Jews. It was bad enough before the 20th century: this graveyard was for centuries the only plot of land they were allowed to bury their dead in, so they had to stack them up to ten deep: 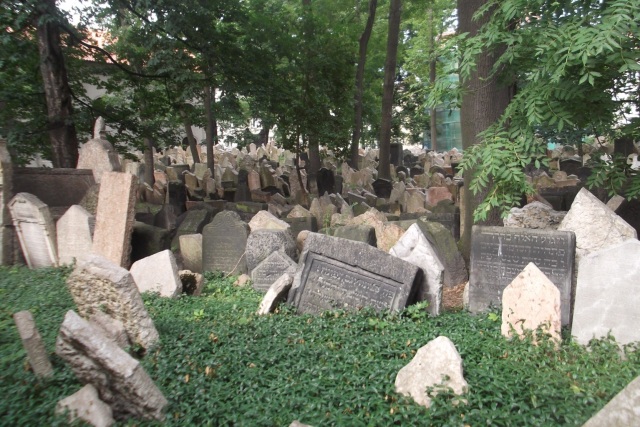 But then came Hitler. Here in Prague there is a beautiful 13th century synagogue with a high Gothic ceiling and wooden pews arranged all around the outside:

what can you say, what can you think, when you sit in one of those pews and know that most of the people who sat in them in the 1930s were murdered?

It gets worse: entering the 19th century Pinkas synagogue, which consists of a hall and several rooms, you are greeted with wall upon wall upon wall covered floor to ceiling with painted names, not much bigger than regular handwriting:

These are the names of the Czech Jews who died in the camps; the number, I am told, is 80,000, but whatever the number it’s overwhelming. It’s like the Menin gate at Ypres; of course you can’t rank atrocities, but at least the 55,000 named on the Menin gate died fighting for King and Country, not just murdered in cold blood.

Upstairs there is a room whose walls are lined with pictures (stuffed in a suitcase and hidden away by one of their teachers when the time came) painted by small Jewish children interpreting their circumstances in the Terezin camp, which the Nazis allowed the Jewish community to run – for a while – and cynically presented as a model of humanitarianism. Many of them show colourful hopes for the future, but there was no future: almost none of them survived the death camps where they were subsequently sent.

These were children. Does the blood boil or does it freeze? Every time I read about these things, or walk into one of these museums, I find myself shouting curses under my breath. But no reaction can be adequate. I am reminded of the reflection of one of those who witnessed the execution of Rudolf Hoess, the commandant of Auschwitz: you can extinguish that one life, but how can you possibly place that in the balance against the lives of the hundreds of thousands who died? How can that possibly make good?

These places have exhibitions of Jewish life down the centuries: the charters, the artifacts, the photos. It’s touching, as would be any exhibition about the life of any community, but I carry no particular torch for them; I have had good Jewish friends to whom I owe a lot, but as a culture it has never interested me especially. So what? These people made a contribution to the societies they lived in, and deserved the right to live in peace on their own terms and be who they wanted to be. Largely, in Europe, now, they do – those who remain. There are dark times ahead, no doubt; but surely, what happened then, never again – not even close?

In the donation boxes in the synagogues, the notes are mostly Czech crowns or US dollars, barely any euros; but it is heartening that whenever I overhear anyone telling the terrible stories, the protagonists are not “Germans” but “Nazis”…

2 Responses to Prague: the Jewish quarter